While it can feel reductionist, when reviewing a game it can sometimes help to look at the gameplay as a loop. You do X, Y, and Z to completion until the game is over, give or take secondary and tertiary goals and objectives. While this might take some of the personality out of the game, it shines a beacon on the strongest aspect of Into the Breach: a very good loop. 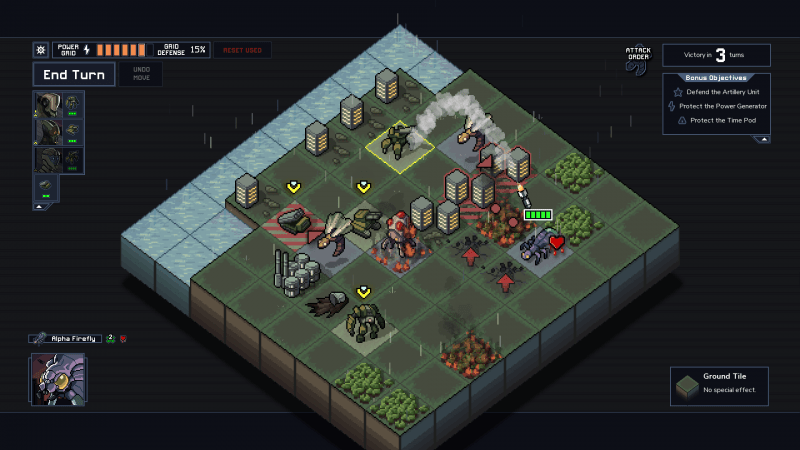 From the creators of FTL: Faster than Light comes the futuristic strategy title Into the Breach, seemingly out of nowhere. It’s been six years since FTL was released, giving Into the Breach a chance to sneak up on us, but it’s a pleasant surprise all the same. The story is a simple alien invasion style riff, checking all the boxes of humanity vs. a faceless insectoid threat called the Vek that is best combated with mechs. Nothing ground breaking, but it doesn’t need to be. Into the Breach is very much a game that is meant to be played, over anything else.

The set up for each mission is you’ll control up to three mechs, all of which can be customized as you see fit, and made to defend a certain number of structures that enable a power grid to support your mechs. Battles take place on a grid, befitting the turn-based combat, as the consistent primary objective of each mission is to hold off the invading Vek forces. How you choose to do this and the freedom you have is where Into the Breach gets its best work done. The game really forces you to flex your strategic muscle, and the simplicity of the controls gives Into the Breach a real “afternoon to learn, lifetime to master” feeling. You’ll run through the scenarios in your mind, thinking you have a perfect strategy and by the time you realized there was a more efficient way to handle the situation it’s simply too late. 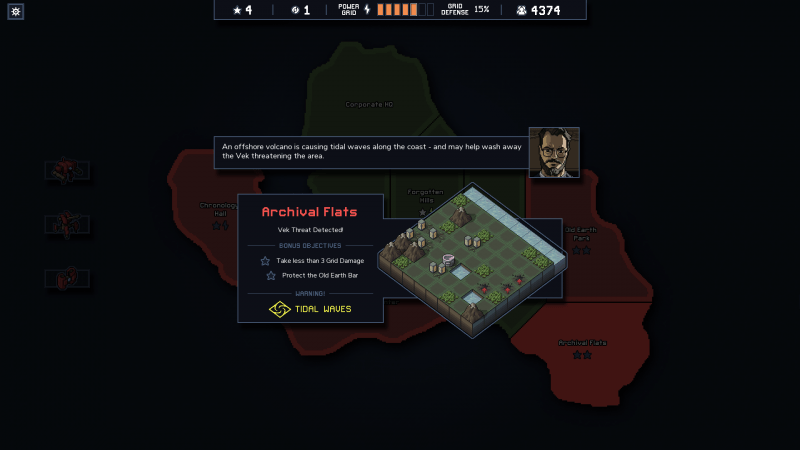 With your mechs not exactly being the most hearty creations on the block, every decision counts in Into the Breach. Making sure you avoid even a small hit can save your life a few turns down the line, as can taking out the Vek in the most optimal manner. The unique pushing mechanic adds another layer to the game, as there are mech features that let you physically move an opponent with your attack and if you played your cards right, pushing a Vek off a cliff results in an immediate kill. This is not a strategy game based around assembling your giant army and crashing it into the enemy or grinding your characters up to an ungodly level and walking through the game.  It’s a game of opportunism, managing risks, knowing when to give up a mech and constantly refining your own strategy. The latter is further driven home by the time travel mechanic, were if the power grid is destroyed, you didn’t meet certain mission specifications like defending a particular structure or you simply lose all your mechs, you can choose one to go back in time and start a new game. While this might seem brutal, you retain that chosen warrior’s upgrades and you’re a bit better equipped strategically to handle the Vek this time around. 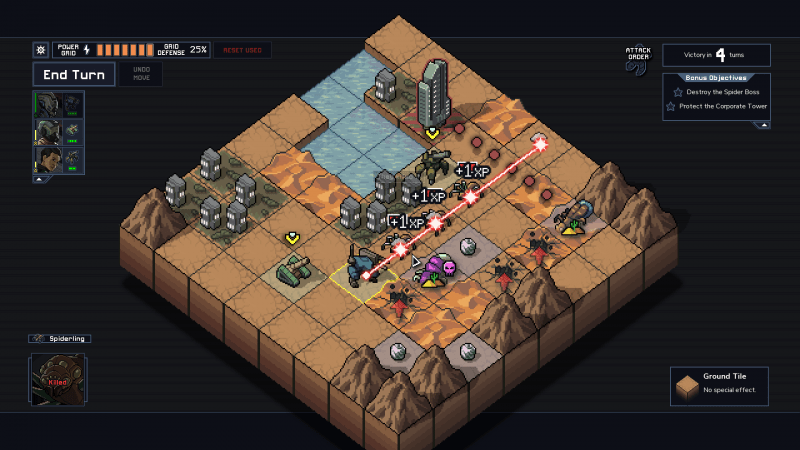 To further add another twist of depth, the game has rougelike elements that keep the battles fresh. You progress through the game by defeating scenarios based on islands, which you can complete in any order after the first one, that all feature various hazards that add yet another level of gameplay. While the islands themselves remain unchanging, the missions within them always feature different layouts and enemy placement. When you die in Into the Breach, you’re left with your one guy and your wits. Nothing to memorize in an effort to complete the game through simply banging your head against the wall. 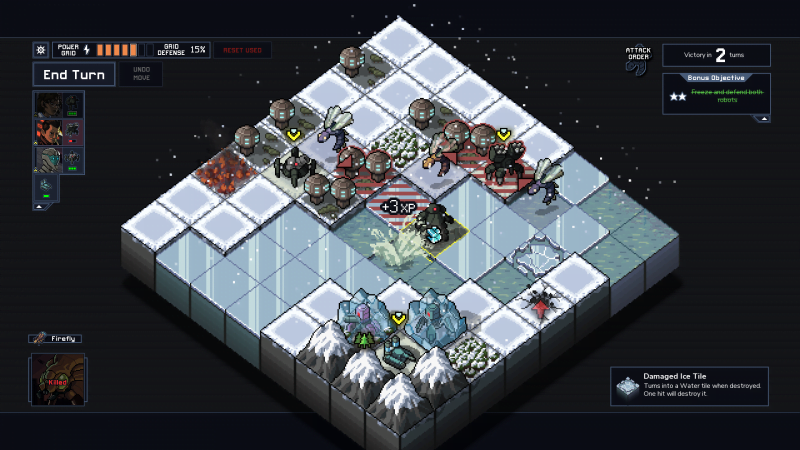 While this all sounds great (and it is,) were does Into the Breach suffer? The answer is almost everywhere else. While it is serviceable graphically and sonically, there’s nothing here you’ll be writing home about. The future military aesthetics are nice but don’t carry the game. All of this is fine, a game doesn’t need to be pretty to be good. However, looking pretty or sounding pretty is not my main gripe with Into the Breach. What causes the game to shy away from its potential greatness is the distinct lack of content.

It’s not an enormous and not every game needs to be but Into the Breach feels exceptionally sparse. The gameplay is excellent, and the concept is truly engaging. A big problem with strategy games is needless complications that are only beloved by veterans of the genre. Into the Breach is a good wiping of the slate, allowing anyone to come in and pit their brain against it. The issue is simply a lack of any content beyond the original idea. While that initial thump from learning the game and the pangs of regret from how you could have handled the last mission better drive you forward, they eventually subside as you overcome the game. By the time you’re in the home stretch, the initial challenge has subsided. The dust has settled. The game never becomes a chore, but the addictive, challenging gameplay is the main thing that sells you on Into the Breach and once you’ve overcome that, it leaves you feeling empty and not hungry. 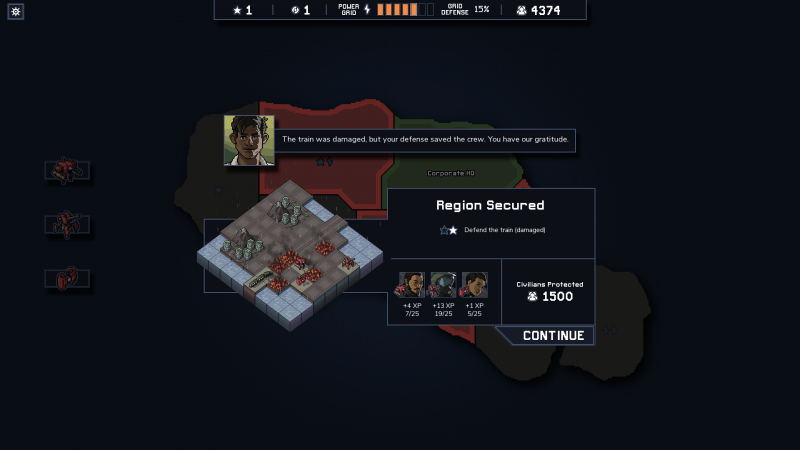 Into the Breach is such a fantastic concept that I would have loved to see pushed to its limits and was disappointed when that was not the case, which maybe says something more about the quality of the game than anything else. This is a game that you should absolutely check out if any of the gameplay descriptions have peaked your interest. A good solid strategy romp that you can pick up and play that still can give you a cluster headache isn’t easy to come by nowadays, and Into the Breach is absolutely that. However, if you’re coming in looking for FTL 2: The Later Years, you are going in with the wrong mindset. Into the Breach simply does not have the RPM to keep up with FTL and while it is unfair to compare them on a 1:1 ratio, Into the Breach is made by the same studio and FTL really felt like it stretched itself to the absolute limit of what could be done with that concept at the time. Does that make Into the Breach a bad game? No. But does the game suffer for not taking risks beyond the stellar original concept? After finishing everything to do in around 30 hours or so in Into the Breach and having over 100 hours in FTL while still having things to do, I would have to say yes.

While the initial gameplay loop Into the Breach delivers feels fresh and hooks you immediately, it doesn't stick around long enough to leave a lasting impression. 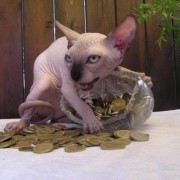